Toni Basil, who among other things, founded these dudes,

also taught Bowie some 'moonwalking' back in '74.

it throws back to the 30's as I recall but the Lockers were outtasight man.

Jan 11th, 2016
the out pouring of love to Bowie here in Gopherland radio has been just unreal all day long - never seen anything like it

Jan 12th, 2016
Was never much of a fan of his music but I can't say he wasn't talented. He undeniably left his mark and influence on the music world.

Jan 12th, 2016
I liked him as much as I like all bands or musicians. Some of their work I like, some I don't. I did not like Bowie's Disco phase with 'Let's dance' etcetera. Jan 15th, 2016
Lemmy, Bowie and Rickman. Three English greats dying within weeks of each other, each at the age of 69.

Lemmy, Bowie and Rickman. Three English greats dying within weeks of each other, each at the age of 69.

unlock the secret of 3,6,9 and rule over the cosmos N Tesla

Feb 28th, 2017
The BAFTAs (Britain's equivalent of the Oscars) has honoured Bowie...

The BAFTA Awards have paid tribute to the late singer David Bowie.

His iconic track Heroes was the soundtrack to the Year in Film montage that was played at tonights ceremony at Londons Royal Opera House.

Afterwards, host Stephen Fry said: Wonderful, not least of course the musical accompaniment from the creative genius that was the magical and deeply missed David Bowie.

Film benefited from his unique gifts as an actor, producer and musician. The world is a far more monochrome place without his colour and vitality.

Feb 6th, 2018
There is no such thing as psychics, but all the wealthy elites see them.

well, except for the MSM, and the TRUMPHATERS, their psychics appear to be fakenews.

[Chorus]
Here am I floating 'round my tin can
Far above the Moon
Planet Earth is blue
And there's nothing I can do"
https://genius.com/David-bowie-space-oddity-lyrics 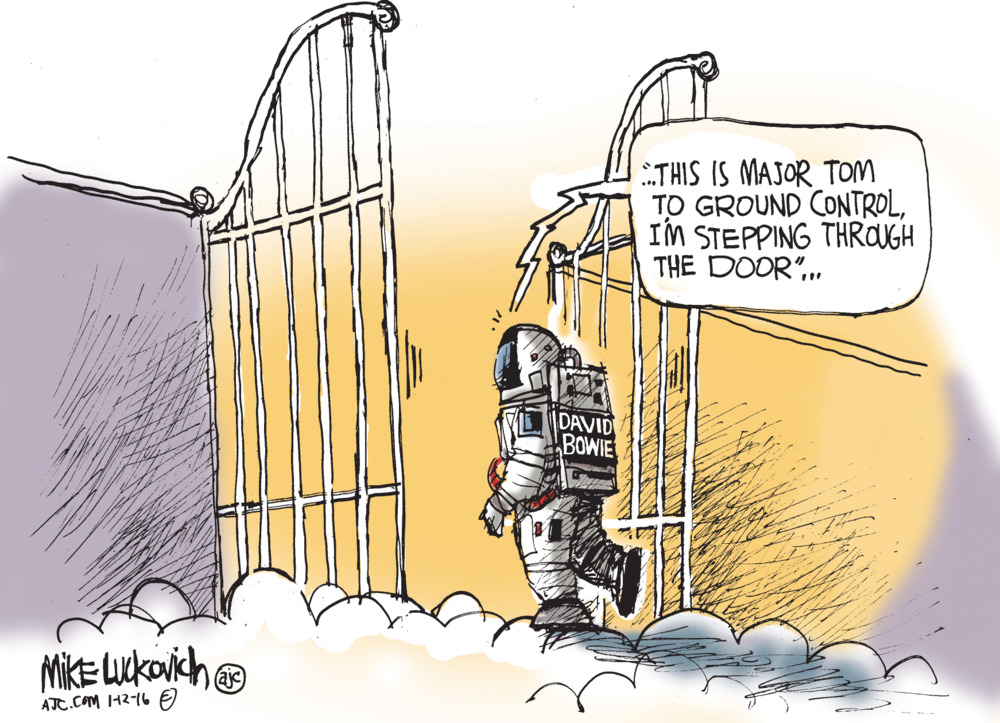 Aug 6th, 2019
'I NEVER GAVE HIM THE BAD NEWS': David Bowie never knew ex-wife was raped
WENN - World Entertainment News Network
Published:
August 5, 2019
Updated:
August 5, 2019 11:05 AM EDT
David owies ex-wife has revealed she was drugged and raped during her 20s, but never told her sensitive husband.
The 69-year-old former It girl Angie Bowie claims she woke up to find two men assaulting her after her drink was spiked during a night out when she was 24.
Everyone from our office and I went to the 82 Club, she tells the Sunday Mirror newspaper. I didnt drink, I didnt do drugs. The rest of them were drinking. I had a Coca-Cola sitting at the bar and I was about to go and sit with them. I didnt notice two South Americans putting a date rape drug in my drink.
I collapsed and the men took me to the Seville Hotel in New York and raped me.
Angie remembers her see-through silk dress was covered in blood and she started punching out at the men.
Finally, when I was tired of punching, I went downstairs. I walked to the 82 Club and there was my driver Tony Massia standing next to the car. He was crying as he didnt know what had happened to me. He saw my dress, and wiped tears from his eyes as we went to my apartment.
Her husband, who was recording in Philadelphia, Pennsylvania at the time, never knew of the attack.
I never gave him bad news, Angie says. That wasnt my job. He wouldnt have been able to deal with that kind of thing. I just learned to block it all out. I ignored it.
http://mirror.co.uk/3am/celebrity-ne...angie-18823526
http://torontosun.com/entertainment/...wife-was-raped