Blackleaf
#1 Jan 29th, 2007
In 1807, Britain became the first country in the world to abolish slavery. From then on, one of the jobs of the Royal Navy was to capture foreign ships - such as those from America, France and Denmark - to stop them continuing to transport slaves. On one of these ships was Midshipman Henry Binstead..... 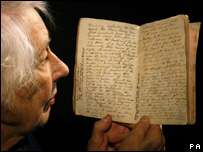 The sailor's great-great-granddaughter with the diary. The accounts will be on display from 3 February

The diary of a British sailor depicting his first hand accounts of the slave trade, is to be put on display at a museum.

The 19th Century document belonged to Midshipman Henry Binstead who kept a record of his time in the Royal Navy off west Africa in 1823-1824.

The diary is part of an exhibition marking the bicentenary of the abolition of transAtlantic slavery.

An act of Parliament banning the transportation and capture of slaves came into force in March 1807 (Britain has the proud distinction of becoming the first country in the world to ban slavery).

Dying 10-12 a day owing to the confinement


In his diary, 28-year-old Binstead wrote: "Observed many large canoes, one of which I went in chase of, on my coming up with her the whole crew jumped overboard and I fear they have met a watery grave, these poor wretches were fearful we were going to make slaves of them."

Midshipman Binstead, originally from Portsmouth, kept account of the human suffering he witnessed when an illegal slave ship was intercepted.

"I never witnessed a more horrid description than my messmates gave me of the wretched state they were in [320 men, women and children] onboard actually dying 10-12 a day owing to the confinement below.

"All the men are in irons and women under them by a small partition."

Rosa Lee, 82, who inherited the diaries from her mother, said: "I am so glad I kept the diaries and they are of interest and that they have found a natural home." The diaries will be on display as part of 'Chasing Freedom: the Royal Navy and the Suppression of the Transatlantic Slave Trade' on display from next weekend.