May and Blanchet declare the oilpatch 'dead,' warn Ottawa against financial supports

Canada's oil and gas sector is on the ropes as COVID-19 crushes demand and a global price war pushes domestic companies to the brink of bankruptcy — but two opposition leaders say Ottawa should simply let part of the industry wither and die.

May 11th, 2020
tater tot already undermined all of them by stating that Canada NEEDS oil.

by the by, did you hear that TMX is is full swing?

https://youtu.be/TZzkoHMHaaU
May and Blanchet declare the oilpatch 'dead,' warn Ottawa against financial supports
Canada's oil and gas sector is on the ropes as COVID-19 crushes demand and a global price war pushes domestic companies to the brink of bankruptcy  but two opposition leaders say Ottawa should simply let part of the industry wither and die.
https://www.cbc.ca/news/politics/oil...ties-1.5557725


Trans Mountain pipeline is about to proceed in BC.

Line 3 is wrapping up.

May 11th, 2020
Mentalfloss and Hoid was trolls that wish hardship on everyday Canadians.

It's being built right now.
KXL is a go.
Line 3 is wrapping up.
Dead

May 11th, 2020
The Earth is continuously producing oil.

If it wasn't dead, it would be dinosaurs.

The Earth is continuously producing oil.

Life is continuously producing oil. The earth does nothing.

May and Blanchet declare the oilpatch 'dead,' warn Ottawa against financial supports

Canada's oil and gas sector is on the ropes as COVID-19 crushes demand and a global price war pushes domestic companies to the brink of bankruptcy  but two opposition leaders say Ottawa should simply let part of the industry wither and die.

Until Blanchet shuts down Quebec's refineries, he needs to keep his big f*cking hypocritical mouth shut about Alberta's oil.

Life is continuously producing oil. The earth does nothing.

Can't have a biochemical process without a medium.

Until Blanchet shuts down Quebec's refineries, he needs to keep his big f*cking hypocritical mouth shut about Alberta's oil.

As long as they buy from third world dictators it won't be a problem. Only Canadian oil pollutes ya know.
Probably why ellimay was sent to Canada. Cut competition for her oil Barron friend in the US.

As long as they buy from third world dictators it won't be a problem. Only Canadian oil pollutes ya know.
Probably why ellimay was sent to Canada. Cut competition for her oil Barron friend in the US.

Truth about Ellie, even if elected she cant be PM. Bipolar.

May 12th, 2020
It's pretty telling when National Post starts going against the script.

Time to invest in Hibernia lol


Elizabeth May responds to John Ivison: The oilsands are not worth investing in

For example, the contribution fossil fuels makes to Canada’s gross domestic product is nowhere near what is routinely claimed. Ivison writes that the oil and gas industry is “responsible for 10 per cent of GDP; employs more than half a million people; and, contributes around $8 billion in tax revenues.” According to Natural Resources Canada, however, the oil and gas sectors combined make up 5.6 per cent of GDP.

The problem with bitumen is that it is both very expensive to produce and of inherently low value. It must go through a further, very expensive, process of upgrading before it is able to be refined. In contrast, the break-even price for Alberta sweet crude (existing production) is in the order of US$25-$30 per barrel. And it is important to note that Hibernia is producing crude that is far more attractive to investors than bitumen, with a far more achievable break-even point.

It's being built right now.
KXL is a go.
Line 3 is wrapping up.
Dead

I'm aware that Trudeau already did what Harper couldn't.

You should be thankful.

May 12th, 2020
All the faux shock over May saying exactly what everyone else is thinking.

What everyone else *already knows*

Obviously not. If oil were truly dead, investment would flee.

I'm aware that Trudeau already did what Harper couldn't.
You should be thankful.

Did Iverson make sense to you?

All the faux shock over May saying exactly what everyone else is thinking.

What everyone else *already knows* 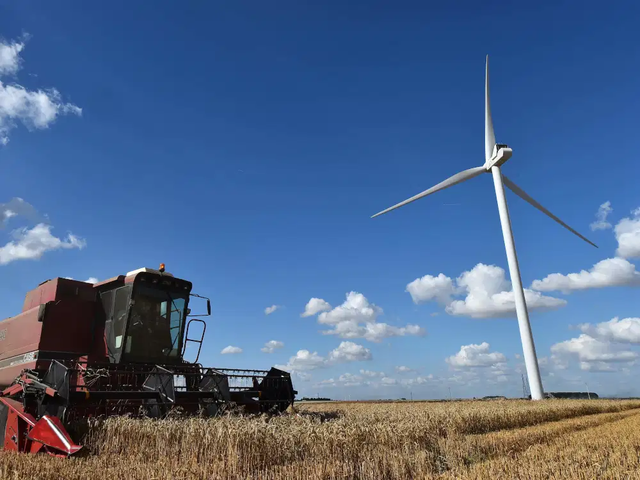 A French farmer harvests a wheat field with a combine harvester, next to wind turbines, on a wind farm in central France in 2017. JEAN-FRANCOIS MONIER/AFP (I don't see an extension cord running from the wind turbine to the combine. Is is hidden in the wheat field?)

On Wednesday, Elizabeth May, the Green partys parliamentary leader, stated that, Oil is dead, and argued that, The pandemic, in a very real way, as horrific as this is at many, many levels, gives us an opportunity to stop and think about how we get this economy back on its feet.

Leaders in Venezuela, Saudi Arabia, Kuwait, Qatar, China, Russia and Norway must have been shocked to hear the news. Imagine waking up on the other side of the world and hearing that the leader of a small Canadian political party declared that your energy industry is dead. I dont know how to say Elizabeth May has told us our oil industry is no more in Norwegian, but I bet it sounds very sad.

Well, Im here to relieve those statesmen, because May wasnt talking about them. They are safe  always have been, always will be. As far as I can tell, May never chastises China, Russia or Qatar. When she said, Oil is dead, it was a verbal Exocet aimed straight at Alberta and its planet-destroying government. Jason Kenney, your province is so over, is how I paraphrase it.

But let us look at her other, in some ways more interesting, claim: that COVID-19 is an  opportunity .

During a global pandemic that has seen hundreds of thousands of deaths, hundreds of thousands more mourning, economies wrecked and near universal anxiety, it is really difficult to craft a sentence in which COVID-19 swims in the same lexical waters as  opportunity . Skip the rote demurrals  as horrific as this is at many, many levels  which function mainly as throat-clearing before getting to the main message.

One would have to scramble over a lot of other quite readily available terms  disaster, tragedy, calamity, plague, threat, misery, heartbreak  before settling on  opportunity  as a choice description for a planetary epidemic. Well done, May.

The kernel of Mays declaration is that COVID-19 can serve as a lever, political or otherwise, to finish off the Alberta oil industry. And that, by her green lights, is an opportunity. I suppose that if you hate the security and comforts of 21st-century civilization that only energy underwrites, and if you despise the many miracles of our time  from medicine, to food, to communications  that energy has enabled, and if you ignore or deny the tremendous contribution that Alberta oil has made to the economy and workers of Canada  then you can, if you work at it, come to see COVID-19 as an  opportunity .

Personally, I find it callous that anyone would use the current pandemic as a weapon in the perpetual green war against Alberta. But environmentalists, as we all know, answer to a higher voice than the rest of us. There is nothing quite like the conviction that you are saving the world to leave you indifferent to the obviously lesser cares and concerns of others. 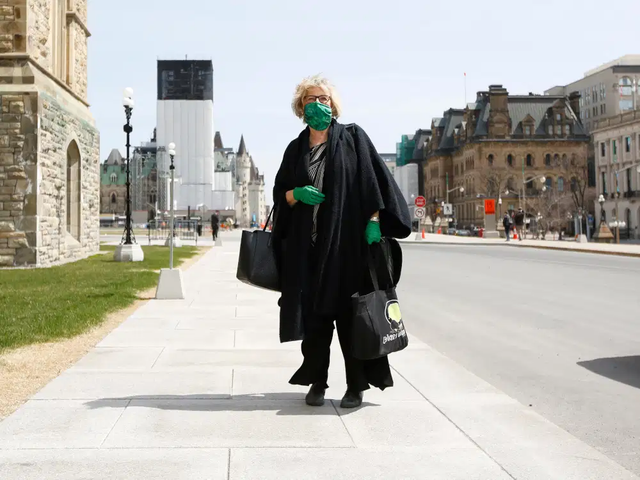 Elizabeth May, Eco-Goblin, skulking around the entrance to the West Block on Parliament Hill in Ottawa, on April 29. David Kawai/Bloomberg

Though Abhijeet Manay, the deputy leader of the Green Party of Ontario, also tweeted this week that, A post-COVID world has no place for the greedy, shortsighted & vicious societies that Big Oil creates, it wasnt exclusively a Green pile-on. Mays perpetual end-of-the-world mentality would be a cry from the fringe without an accompanying three cheers from the separatists.

The always vigilant CBC had the perfect headline: May and Blanchet declare the oil patch dead. And they do make a congenial duo: Bloc Québécois Leader Yves-François Blanchet wishes to separate from Canada; and May wants to separate from reality. Blanchet spits on Alberta oil, but it still flows into Quebec. And if oil is really dead, shouldnt someone stop those tankers from Saudi Arabia and Venezuela that drift into the Montreal harbour to stoke Quebecs economy? Even separatists drive cars, and some even want to warm their homes with Western energy.

Alberta has kept Quebec a winner in the equalization bingo game for decades. Quebec should, at the very least, have the good sense not to insult its benefactors. If it were not for vicious oil workers and the dirty oilsands, the streams of equalization, and the dreams of separatism, would have dried up long ago.

The greatest chasm in Canadian politics is the gap between professional global warming activists and people who work for a living. Let us compare those who hate oil with those who produce it in terms of their contribution to Canadas well-being. 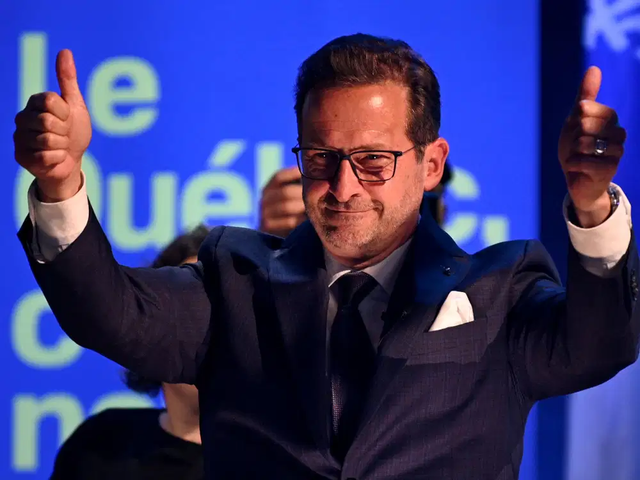 There is the great number of people who leave their house every morning to put in an honest eight or 12 hours in a mine, oilfield or forest, and another set who tweet a lot, shuffle out grim press releases by the mile and stage gimmicky protests, all in an effort to stop the first bunch from having any work to go to. The hive of climate activists do nothing but sneer at those who keep the nation moving.

This latest battery from May reveals a cardinal element in the green world: environmentalism is a species of snobbery. She knows what Albertans want, and they can hardly be trusted to know for themselves. The Greens prate and sing their virtuous hymns. They slam a carbon tax on the farmers and truck drivers during a plague, without a whisper of apology. They are spiteful of Canadian sources of oil, but silent on every other international source. No wonder they find a bedfellow in a separatist leader.

How many jobs has Elizabeth May created? How many families have been fed by environmental protests? How many poor Canadians were lifted out of the welfare trap because some smug spokesman for a cleaner world gave a press conference? How many Indigenous reserves are better off  their drinking water cleaner, their young people with better prospects  because the Sierra Club, Greenpeace or Mays Green party has been around? What, aside from unending, captious alarmism have they contributed to anyone other than their own specious cause?

Oil is dead; the pandemic is an opportunity to make sure it stays that way. The separatist leader and the Green leader are doing what they can to make Canada an easy place for some to think of leaving it. Alberta Premier Jason Kenney called their statements divisive. He was too kind. There are more vigorous words on call, but they do not belong in print.

Norway wants to leave bags of cash on the table for other folks, i say good riddance.


The UK is trying the same thing. Now that they are officially in a recession, we'll see if they have the appetite to walk away from a proven income generation machine and back renewables that simply can not exist without massive subsidies

What the hell have we been doing here?

Norway is a shining example of how to use oil profits.

What the hell have we been doing here?

But what do they know?