The patience of Tobias [or Tobit]: Loqman

Torch light
#1 Dec 30th, 2019
Tobias in the Quran is called Loqman .. but none of Muslims and non-Muslims knew who is this Loqman .. and it was a miracle of the Quran interpretation when Abu abd-Allah said: Loqman in the Quran is the same Tobias in the Bible, and only God mentioned him with his title or surname: his excellent kindness so that he put the 'loqma' or the morsel in the mouth of the poor.

Tobias exhorted his son (who bore the same name: Tobias)

Dec 30th, 2019
It seems that Tobias the son was afflicted by some mishap and then his father Tobias exhorted him to have patience; because the patience in affliction is recommended just as how the gratitude is recommended for the blessing and bounty of God.

33 c About God’s obedience [and being patient in the affliction.]
33 d To God’s bounties.

12 a That is the knowledge and admonition which God gave him on account of his righteousness and piety.

12 b Luqman [: Tobias] was one of the Children of Israel, of the tribe of Naphtali; he resided in Palestine in Galilee, in the time of Rehoboam son of Solomon.
His name was Tobias, and in fact God surnamed him in the Quran as Loqman, because [as the word in Arabic implies] he used to feed the poor and needy and to put the 'loqma' or the morsel in their mouths, and that was according to his kind heart and good conduct.
The name of his wife was Anna who bore for him a son whom he named in his same name [Tobias] also.
He was pious and righteous, enjoining the right and forbidding the wrong, and commanding his people to obey God.
His story is mentioned in details in the Torah collection [the Bible: the Old Testament], the Book of Tobias (or Tobiah) according to his name.

12 c For that He guided you, and gave to you the wisdom and the righteous son.

12 d It means: the reward of his gratitude will be for himself, and he will get more blessings of God.
The indication of this is His saying – be glorified – in the Quran 14: 7, which means:
("If you are thankful, I will surely increase you[r blessing.])
It means: I will increase your bounties, in addition to what bounties you already have. 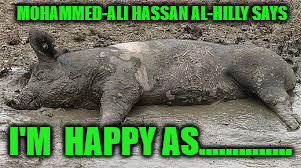 12
The public are running out of patience with Remainers who drum up fake Brexit anxiety
by Blackleaf | Oct 15th, 2017
19
Scots are in for a shock when the English run out of patience
by Blackleaf | May 12th, 2015
1
Colonel urges patience on Afghanistan mission
by CBC News | Oct 24th, 2006
CCIM © . All rights reserved.
About CC | Contact Us | Terms of Service | Archive | Free Software Downloads
Powered by vBulletin® Version 3.8.11
Copyright ©2000 - 2020, Jelsoft Enterprises Ltd.