spaminator
#1 Jul 26th, 2015
WWE fires Hulk Hogan over racist remarks
GREG OLIVER, For Postmedia Network
First posted: Friday, July 24, 2015 10:26 AM EDT | Updated: Friday, July 24, 2015 10:35 AM EDT
World Wrestling Entertainment and its most famous champion, Hulk Hogan, have severed their relationship apparently over a racist rant on a Hogan sex tape.
According to the National Enquirer , it was because of racist remarks that have been released from an unauthorized sex tape.
Hogan allegedly uses countless racial insults, including the "n-word."
WWE, a publicly-traded company, released a statement today: "WWE terminated its contract with Terry Bollea (aka Hulk Hogan). WWE is committed to embracing and celebrating individuals from all backgrounds as demonstrated by the diversity of our employees, performers and fans worldwide."
Hogan, 61, has been removed from the WWE.com website, including his merchandise from the online store.
He has also been removed as a judge from the current edition of Tough Enough.
Late Thursday night, Hogan tweeted a strange message: "In the storm I release control, God and his Universe will sail me where he wants me to be, one love. HH."
Hogan was the headliner for the then-World Wrestling Federation in the 1980s and early 1990s, before jumping to the rival World Championship Wrestling. The company's third-longest reigning heavyweight champion ever, Hogan returned and departed from WWE on a few other occasions.
Even when not in wrestling, he remained in the public eye through the years, whether in movies, television shows, or the reality show, Hogan Knows Best.
In 2005, Hogan was inducted into the WWE Hall of Fame, introduced by Sylvester Stallone, who had a hand in making a Hogan a celebrity, casting Hogan as Thunderlips in Rocky III. Hogan was inducted into the Professional Wrestling Hall of Fame in 2003, though has yet to make an appearance to pick up his induction ring.
The sex tape, from around 2006 but released in 2012, was with Heather Clem, the wife of radio personality Bubba "The Love Sponge" Clem. Hogan sued to try to block its release.
Clem talked about Hogan on this morning's radio show, and almost defended his former friend, saying that context is important, and seemed to reference another Hogan racist-like rant.
Said Clem: "If it's not a hard-sell, then Vince McMahon needs to retire tomorrow since you've done more controversial things with your company than what Hogan said answering questions from an African-American man that had already used the 'n-word' in a camaraderie-type context."
WWE fires Hulk Hogan over racist remarks | PRO WRESTLING | Other Sports | Sports 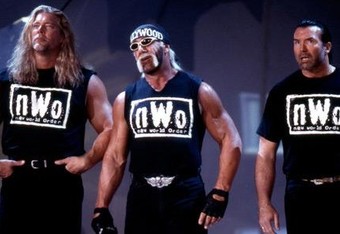 Jul 26th, 2015
No one forced him to say the things he did and no one else is responsible.
Being in radio for decades I always wondered how people used to media
and entertainment could be so careless around mikes and get themselves
into so much trouble. Now it is true these things were said ten years ago
but today you are still accountable

Jul 27th, 2015
now the WWE is reminiscing about the Kliq (which did not feature Hogan) and acting as if it was the biggest or toughest faction in wrestling history - no question that it was great but it will never rise to the same level as the nWo

truly one of a kind

Jul 16th, 2018
if I remember correctly the Hogan family blamed a passenger for a terrible accident that the Hogan son was responsible for.

Jul 16th, 2018
Hogan's many fans from all racial/ethnic backgrounds called for his immediate reinstatement for these three years and that he should not have been banned. Promoter McMahon's promotions have included every stereotype in the book with some of his wrestlers alleging that he was a racist. I'm not sure that charge is justified but remain convinced there was no actual cause to ban Hogan who has donated tens of thousands of dollars to charities and promoted the careers of several black, Asian, and Latino wrestlers.

he is our favorite racist wrestler

This gem remains one of the most popular segments in pro wrestling history. Booker T has had to answer for it just about every day of his life ever since he accidentally blurted out that dreaded term.

Jul 16th, 2018
The WWF is happy now too, given the actual state of Orangutan populations.

Sep 4th, 2018
nWo has posted several announcements on you tube and saying they will be back soon