Blackleaf
#1 Sep 2nd, 2016
Another piece of scaremongering from the Remainers - that Scots would overwhelmingly want to break away from the UK if the UK as a whole votes for Brexit but Scotland votes to stay in the EU - has been blown to smithereens.

In a blow to the Scottish National Party (SNP) leader Nicola Sturgeon as she starts a new push for separation, the YouGov poll shows that despite a Brexit vote that was mostly rejected in Scotland, 54% of people still back the union, with 46% supporting independence.

All the Remainers' arguments against Brexit are just falling one by one.

The YouGov poll showed 54% of people still back Scotland staying in the UK. 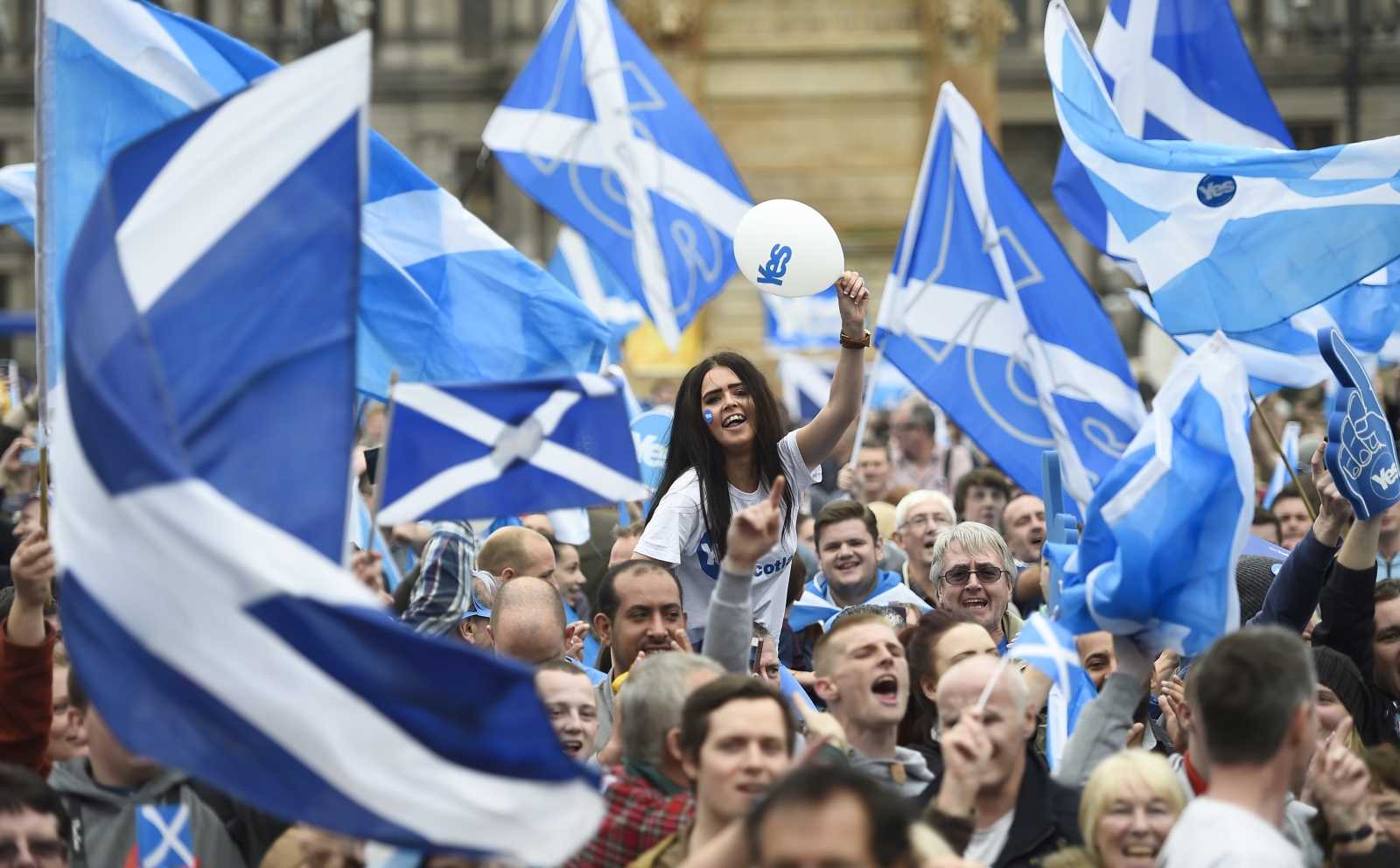 Scots are not keen for another independence referendum before Brexit and would back staying in the United Kingdom, a poll has revealed.

In a blow to the Scottish National Party (SNP) leader Nicola Sturgeon as she starts a new push for separation, the YouGov poll shows that despite a Brexit vote that was mostly rejected in Scotland, 54% of people still back the union, with 46% supporting independence.

Sturgeon will use a speech on Friday (2 September) to outline the differences between hers and Theresa May's governments and will say in Stirling: "The UK that existed before June 23 has fundamentally changed.

"The debate now is whether we should go forward, protecting our place as a European nation or go backwards, under a Tory government. The debate must include an examination of independence in what are profoundly changed circumstances."

However the poll, which was carried out for The Times, delivered some more bad news for Sturgeon, showing that Scottish Conservative leader Ruth Davidson now has a higher net personal approval rating than the SNP leader.

It also showed that 49 per cent of all voters think that Scotland benefits economically from being part of the UK, while only 23 per cent think it is harmed.

Sep 2nd, 2016
I suppose they could always hold a referendum, you know, like Crimea did.

I suppose they could always hold a referendum, you know, like Crimea did.

They did, two years ago.

Sep 2nd, 2016
That was a different topic, this one would be about remaining part of the EU. (only this time allow people to move there and vote)

That was a different topic, this one would be about remaining part of the EU. (only this time allow people to move there and vote)

If some people in Scotland want to be in the EU they can bugger off and go and live in an EU country like Republic of Ireland or France or backward Greece and let the Brexit majority of the United Kingdom plough on with getting the United Kingdom out of the EU.

Sep 5th, 2016
"If the UK as a whole votes to leave the EU, but Scotland votes to stay in, then the Scots will start clamouring for a second independence referendum", was the cry from the deluded Remainers during the EU in/out referendum campaign.

This scare tactic obviously failed to work because, even though the Scots did vote against Brexit, the UK as a whole voted for it.

But rather than the Scots clamouring for independence, polls show that a healthy majority are still against leaving the UK, despite Brexit.

And a lot of those Remainers who made such warnings are now nothing but dead ducks - including even Scottish First Minister Nicola Sturgeon, the leader of the pro-independence SNP and Scotland's First Minister. A poll has shown that she has now been overtaken in the popularity stakes by the leader of the Scottish Conservatives Ruth Davidson, who campaigned against Scottish independence during the Scottish independence campaign. And this is despite that fact that Scotland has been so heavily anti-Tory for years!

DOMINIC LAWSON: How Brexit's made dead ducks of those who warned it would doom the Union

By Dominic Lawson for the Daily Mail
5 September 2016

Who do you think is, according to the latest polling, the most popular politician in Scotland? The leader of the Scottish National Party, Nicola Sturgeon, surely?

After all, on June 23, while the UK as a whole voted to leave the EU, those in Scotland voted by 62 to 38 per cent to remain. And we were authoritatively told before the vote that such an outcome would so enrage the Scots it was certain they would immediately demand another referendum on independence and leave the UK.

But, ten weeks after the Brexit vote, the Scottish politician with the highest net approval rating is... the leader of the Conservative (and Unionist) Party (to give it its full, official name) in Scotland, Ruth Davidson. Project Fear: During the campaign over the UKs membership of the EU, Tony Blair, Nick Clegg and John Major asserted that Brexit would precipitate the break-up of the United Kingdom

It is true the feisty and occasionally ferocious Davidson campaigned for Britain to remain in the EU. But, as the title of her party makes clear, she is also an implacable advocate for the more than 300-year-old union between England and Scotland.

The same YouGov poll, published last Friday, also showed support for a second Scottish independence referendum dwindling, with only 37 per cent saying they wanted such a vote ahead of the UKs eventual exit from the EU. And the overall figure showed 54 per cent in favour of remaining in the UK, with 46 favouring independence  virtually the same as the actual vote in 2014 which saw Scots rejecting the separatist cause.

Polls go up and down. None of them is entirely reliable. But it is still difficult to overstate how foolish these figures make a lot of important people look.

During the campaign over the UKs membership of the EU, all of them  as part of what became known as Project Fear  asserted, as a cast-iron certainty, that Brexit would precipitate the break-up of the United Kingdom.

Popular: Ruth Davidson, the leader of the Scottish Conservative and Unionist Party in Scotland, is now more popular amongst Scots than pro-independence Nicola Sturgeon. Davidson has been tipped to be a future British Prime Minister

Thus Tony Blair said: In my opinion, if the UK votes to leave Europe, Scotland will vote to leave the UK; John Major, that the most successful union in world history would be broken up for good; William Hague, that if we voted for Brexit on June 23, to end up destroying the United Kingdom would not be a clever days work; Nick Clegg, that we would be left with no union.

Meanwhile, at the most anti-Brexit of our national newspapers, The Guardians most respected commentator on European matters, Timothy Garton Ash, wrote: If the English vote to leave the EU, the Scots will vote to leave the UK, and the venerable Polly Toynbee warned that Scotland will be gone.

There was not the slightest suggestion of any doubt in these prognostications. Not a single maybe or a perhaps. This seemed silly to me at the time, so in March I described such doomsters sarcastically as veritable Nostradamuses.

I wrote this after the former Lib Dem Energy Secretary Ed Davey mocked The Suns assertion that the Queen was pro-Brexit. He argued that the Queen was a passionate supporter of the Union between England and Scotland and: The Queen knows that if we were to vote to pull out of the EU, its the surest way to destroy the UK, because Scotland will then vote to go independent, as we all know.

I went on to say that not only did I doubt Mr Daveys ability to read the monarchs mind, but that the economic justification for Scottish independence mounted by the SNP had rested on absurdly high estimates of future revenues from North Sea oil  which had been comprehensively refuted by events.

The Scottish referendum was held when the oil price was well north of $100 a barrel, and I observed how Scotlands own official accounts now revealed a monstrous deficit which would leave the Scots to face almost Greek-style austerity (possibly under German supervision) as a notionally independent country within the EU. Dismissed: Nicola Sturgeon (pictured) was bluntly told by a number of EU leaders that an independent Scotland would have to reapply for membership to the EU from scratch

Its not even as if the Scots could move seamlessly into the EU as an independent nation. Immediately after the Brexit vote, Ms Sturgeon attempted such an argument on a trip to Brussels. She was bluntly told by a number of EU leaders that an independent Scotland would have to reapply from scratch: and, as a new prospective member, it would be obliged to agree to adopt the euro.

It was precisely because he knew the Scottish people would not want to give up the pound for the euro that, during the referendum of 2014, Ms Sturgeons predecessor Alex Salmond struggled so much when Westminster said: But what if we dont want an independent Scotland to be part of the sterling zone?

The other economic selling point for Scottish independence had been that it could operate a policy of special tax incentives to encourage big foreign companies to invest. The SNP cited Ireland as an example of what could be achieved.

Oh dear: last week the EU showed how ruthlessly it would squash such tax competiveness when it declared illegal the incentives Dublin had given to Apple, the most successful example of the Irish wooing of foreign investment.

This will not have gone unnoticed across the Irish Sea in Scotland.

Money counts, of course. And, without wishing to indulge in stereotypes, the Scots are a prudent people.

Presumably many of the 62 per cent who had cast their ballot on June 23 to stay in the EU did so because they believed the assertion of the Remain campaign that a Brexit vote would so panic the markets that interest rates would spiral up, businesses would stop investing, and unemployment would soar.

If any of this had proved remotely true, there may well have been an overwhelming complaint by Scots that the pro-Brexit English had plunged them into a crisis  and Nicola Sturgeon would now be riding high on demands for a second independence referendum. But it didnt, they arent, and she isnt.

Instead, we have one of her predecessors as SNP leader, Gordon Wilson, admitting in yesterdays Sunday Times: A second referendum is no longer on the cards. It is a dead duck.

Thats as good a phrase as any for those forecasts from Messrs Blair, Major, Clegg and all the other would-be Cassandras of post-Brexit dissolution for the UK. Dead ducks, the lot of them.

Read more: DOMINIC LAWSON: How Brexit's made dead ducks of those who warned it would doom the Union* | Daily Mail Online
Follow us: @MailOnline on Twitter | DailyMail on Facebook