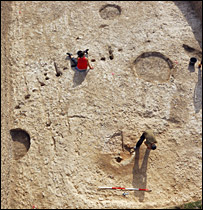 The ancient village would have housed hundreds of people and was occupied around 2500 BC, the same period that Stonehenge was built (Image: National Geographic)

Archaeologists say they have found a huge ancient settlement used by the people who built Stonehenge.

People seem to have occupied the sites seasonally, using them for ritual feasting and funeral ceremonies.

In ancient times, this settlement would have housed hundreds of people, making it the largest Neolithic village ever found in Britain.

"In what were houses, we have excavated the outlines on the floors of box beds and wooden dressers or cupboards," said archaeologist Mike Parker Pearson of Sheffield University.

He said he based this on the fact that these abodes had exactly the same layout as Neolithic houses at Skara Brae in Orkney, which have survived intact because - unlike these dwellings - they were made of stone.

Stonehenge is in Wiltshire in the South West

The researchers have excavated eight houses in total that belonged to the Durrington settlement. But they have identified many other probable dwellings using geophysical surveying equipment.

The archaeologists think there could have been at least one hundred houses.

Each one would have measured about 5m (16ft) square: "fairly pokey", according to Professor Parker Pearson.

The dwellings were made of wood, with a clay floor and central hearth.

The archaeologists found 4,600-year-old rubbish covering the floors of the houses.

"It is the richest - by that I mean the filthiest - site of this period known in Britain," Professor Parker Pearson told BBC News. 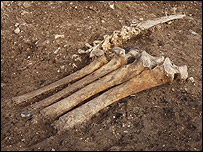 Animal bones were strewn on the floors of the houses (Image: National Geographic)

"We've never seen such quantities of pottery and animal bone and flint."

The Sheffield University researcher thinks the settlement was probably not lived in all year round. Instead, he believes, Stonehenge and Durrington formed a religious complex used for funerary rituals.

Professor Parker Pearson believes it drew Neolithic people from all over the region, who came for massive feasts in the midwinter, where prodigious quantities of food were consumed. The bones were then tossed on the floors of the houses.

"The rubbish isn't your average domestic debris. There's a lack of craft-working equipment for cleaning animal hides and no evidence for crop-processing," he said.

"The animal bones are being thrown away half-eaten. It's what we call a feasting assemblage. This is where they went to party - you could say it was the first free festival."

The Durrington settlement has its own henge, this one made of wood.

This ancient circle was discovered in 1967 - long before any houses were excavated.

Both henges line up with events in the astronomical calendar - but not the same ones.

This fits nicely with the idea of a feast held in midwinter, which is in turn supported by analysis of pig teeth found at the site.

"One of the things we can tell from the pig teeth we've looked at is that most of them have been slaughtered at nine months. And we think they are farrowing in Spring," he said.

"It's likely there's a midwinter cull and that ties in with our midwinter solstice alignments at Durrington and Stonehenge."

In a separate area, further up the valley, Julian Thomas of Manchester University, discovered two other Neolithic houses, each surrounded by a timber fence and ditches.

But unlike the houses further down the valley, these were free of rubbish: "At first we thought they had been washed out," Professor Thomas said.

But the researchers now think these dwellings were deliberately kept clean and could have been home to community leaders, wise women, chiefs or priests. 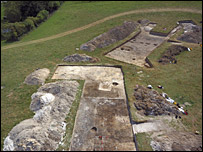 The researchers say they will find many more houses (Image: National Geographic)


Alternatively, they could also have been sacred sites, where people went to carry out rituals.

Professor Parker Pearson believes Durrington's purpose was to celebrate life and deposit the dead in the river for transport to the afterlife, while Stonehenge was a memorial and even final resting place for some of the dead.

After feasting, he speculated, the people travelled down the avenue to deposit their dead in the River Avon flowing towards Stonehenge.

They then moved along Stonehenge's main "avenue" to the monument, where they would cremate and bury a select few of their dead.

Stonehenge was therefore a place for these people, said the Sheffield researcher, who worshipped their ancestors, to commune with the spirits of those who died.

Stonehenge was the largest cemetery in Britain at the time, containing about 250 ashes from cremations.

However, other archaeologists say there are problems dating Stonehenge itself because the stone ring has been rebuilt and altered many times.

As this has been done, archaeological material has been dug up and reburied on numerous occasions, making it difficult to assign a date to the original construction.