Kreskin
#1 Feb 17th, 2008
Iraq faces a period of economic growth and political progress, according to assessments by the International Monetary Fund and the UN. 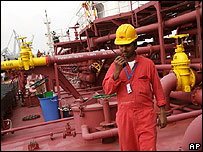 The IMF sees 7% growth in 2008 and a similar rise next year, and says oil revenues from buoyant exports should be up by 200,000 barrels a day.

The UN envoy to Iraq welcomed dialogue between the Sunni and Shia communities and praised the government's work.

But analysts warn much depends on rapid progress in the next six to 12 months.

Reporting from Baghdad, the BBC's Jonny Dymond says the IMF and UN statements amount to a coincidental chorus of approval that tops off what have been, by Iraq's dismal standards, a good few weeks.

The change in the political mood is largely down to the passing of a law on Saturday, enabling some members of the Baath Party of Saddam Hussain to re-enter the military and bureaucracy, our correspondent says.

They were barred from public service by one of the first acts of the US-run Coalition Provisional Administration.

The law reversing that expulsion, combined with the sharp fall in violence in much of Iraq, has led to greater optimism.

Mohsin Khan, director of the IMF's Middle East and Central Asia department, said Iraqi GDP growth would likely top 7% this year and hold at between 7% and 8% next year. 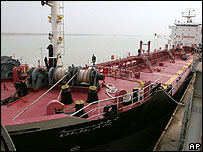 China delivered a new oil tanker to Iraq in December


"Of course all of this is conditional on oil production expansion and the security situation improving," he said.
On oil production, he forecast a rise of "at least" 200,000 barrels to 2.2m barrels per day.

Anecdotal evidence, Mr Khan added, suggests there was also an "improvement in economic activity" in the second half of 2007, combined with an improvement in security.
However, Iraq will "continue to need aid, particularly in the security area", the IMF official said.

The UN's Staffan de Mistura said he would present a positive picture of progress in Iraq in a report to the UN Security Council despite earlier serious misgivings
"At the beginning of [2007]... we were genuinely concerned by the lack of progress on national dialogue," he told Reuters news agency by telephone.
"Today that has substantially changed. It has changed our mind from being worried or from being pessimistic."

The UN report would, he said, "compliment" Iraq's government on its work at fostering reconciliation.

"Iraq needs to maintain the momentum, 2008 is going to be a crucial year," Mr de Mistura added.

Violence continued in Iraq on Wednesday as a woman suicide bomber killed eight people in Diyala Province, and three US soldiers were shot dead in Salahaddin Province. A wounded eyewitness in Khan Bani Saad, a town near Diyala's provincial capital Baquba, said the bomber had targeted a group of Shia worshippers.

After one million dead, more millions injured and in hospitals, three million in exile, and an infrastructure that is in shambles, anything can be viewed as an improvement.

Hopefully, no one will attack the oil rigs so that revenues can be gotten to pay for all that.

Feb 18th, 2008
Is Paul Wolfowitz still working for the IMF or has this lying Zionist proponent of the American Invasion of Iraq now working for some American petroleum cartel?

You can tell an American anything.....

When they speak into wireless communication devices and wear hardhats on worksites it's a sign that life is good and all is forgotten.