Her middle-class family are modest, retiring and charming. But Kate will have to make a choice as to whether to go and face a lifetime of duty by the side of the future King, or back out now, before the public's fascination for her blights her life permanently.
Pic: Michael Dunlea
-------------------------

William and Kate have been a couple for two years, for the past year sharing a house while completing their studies at St Andrews. They have been spotted out on the town together and have let the British public know the extent of their love for one another.
Pic: Steve Waters
------------------------

The first crucial getting-to-know you meetings between the House of Middleton and the House of Windsor took place around the time of William and Kate's June graduation from St Andrews, where the prince was awarded a 2:1 degree in geography.
Pic: David Cruickshanks 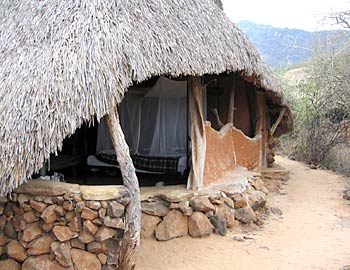 They have holidayed together as a couple - on safari in Kenya (pictured), skiing in Klosters and Verbier and they recently shared a bedroom in a country-house hotel.
Pic: Mark Large

Kate caught William's eye - quite understandably - when parading this diaphanous number on the catwalk for a charity fashion show.
Pic: Malcolm Clarke

Kate is astonishingly confident in her appearances before the cameras. When asked by photographers if she would pose, Kate declined, explaining: 'If I pose for you, I'll have to pose for everyone wherever I go, when I'm skiing and so on.' Clearly, this is a young woman who expects to stick around then?
© Rex Features

Already it is established that the couple may live together once William begins to work in the City in the autumn, though the details are yet to be confirmed. But there is nothing remotely royal about the world Kate Middleton is leaving behind as she steps into the spotlight as Prince William's possible wife-to-be.
© Rex Features

Now, I could live with her being the future Queen Consort.

I'm sure you could

That's what I've been told.

Either people want to see Britain's future - and beautiful - Queen, or someone like Special Branch is reading it!

Blackleaf
#5 May 11th, 2006
If she becomes Queen, and I think she will, then she'll be Queen Catherine. Kate is just short for her real name.

So we'll have King William V and Queen Catherine.

Curiosity
#9 Nov 27th, 2006
Does this mean that the past "virginal inspection for future Queens" is out of date now?? Diana was subjected to it for William's father

If they are living in the same household, I cannot believe they haven't had a few romps in the sack.

Blackleaf
#11 Nov 29th, 2006
Proof that British royals - even someone who is likely to be our future Queen - can start life as an ordinary person......

One's boyfriend is next bin line to the throne


It's a chore she may not have to tackle for much longer, but for now Kate Middleton still has to put out her own bin bags.

Prince William's 24-year-old girlfriend was spotted putting out the rubbish before leaving home.

Rumours of an imminent engagement intensified after it was revealed Kate, who met William, 24, at St Andrews University, has been invited to join the royal family for Christmas lunch at Sandringham.

It is the first time an unmarried partner has been invited to the festivities at the Norfolk estate, and it clearly indicates how close Kate has become to the family since she first started dating the prince in 2003. PRINCE William’s girlfriend Kate Middleton has finally landed a job — as a TEAGIRL.

England’s most likely future Queen brewed cuppas and ran errands fetching drinks and snacks while helping on a fashion shoot.

She happily mucked in as part of her new role working as an accessory buyer for fashion chain Jigsaw.

An insider at the shoot in Shepherd’s Bush, West London, said: “There’s nothing snooty about Kate. She was determined to make herself useful during the shoot — and that included making tea.

“Some of the staff there did find it a bit odd being waited on by the potential future Queen. But it shows William has pulled a real cracker with no airs and graces. He’s a lucky chap.”

Kate left uni with a 2:1 degree last summer and has been working on her own childrenswear mail order website.


She is understood to have joined Mr Robinson’s empire to learn more about fashion retailing and marketing.

Kate and William, 24, spent Easter at Mr Robinson’s home on the Caribbean isle of Mustique. Speculation is mounting they will become engaged in the New Year.

Woolworths has already designed memorabilia including mugs to celebrate the predicted event.

Kate is following in the footsteps of William’s mum Diana, who also took a part-time job before marrying Charles — working as a teaching assistant.

Why is it so high? Is it a conspiracy?

Proof that British royals - even someone who is likely to be our future Queen - can start life as an ordinary person......


I realize some of you will jump all over me for this, but who really cares who the man dates, marries or gets involved with? When are we going to finally open our eyes and realize that these people are not important. It is insulting that these people maintain titles that are illrelevant to the modern world. They live lives of priviledge and status that they did not earn, and we spend god knows how much time being terribly interested in their going's-on. I truly find it totally silly to continue in this facade of having a "Royal" family.

I realize some of you will jump all over me for this, but who really cares who the man dates, marries or gets involved with? When are we going to finally open our eyes and realize that these people are not important. It is insulting that these people maintain titles that are illrelevant to the modern world. They live lives of priviledge and status that they did not earn, and we spend god knows how much time being terribly interested in their going's-on. I truly find it totally silly to continue in this facade of having a "Royal" family.

Princess Kate
#17 May 7th, 2008
Im not a monarchist, but if the Monarchy is to exist, at least there will now be someone decent to look at in the media

Corrector
#18 Jan 12th, 2009
Middleton will never be "Princess Kate", just like Diana was never "Princess Diana". Diana was legally and correctly "The Princess Charles" during her marriage, because princesses-by-marriage use their husband's Christian name.. Kate will thus be HRH Princess William of Wales, just like Prince Michael's wife is HRH Princess Michael of Kent (not Princess Marie-Christine). This is a British tradition and you shouldn't ignore it.

hermanntrude
#19 Jan 12th, 2009
I always wondered why princess michael had a man's name. I met her once... perhaps i should have asked.

Corrector
#20 Jan 12th, 2009
She doesn't have a man's name. HER name is still Marie-Christine. However, she uses her husband's name and territorial designation as part of her title and style. Therefore she is HRH Princess Michael of Kent, just like a woman married to Mr John Smith is styled Mrs John Smith.