London's "heart of stone" to be rescued.

The London Stone is an ancient stone, that is said to be the place from which the Romans measured all distances in Great Britain.

Whether or not this is true, the London Stone was for many hundreds of years recognised as the symbolic authority and heart of the City of London. It was the place that deals were forged, and oaths were sworn. It was also the point from which official proclamations were made. Jack Cade, popular leader of those who rebelled against Henry VI in 1450, observed the tradition by striking his sword against it as a symbol of sovereignty after his forces entered London; on striking the stone, he then felt emboldened to declare himself lord of the city. John Dee, Queen Elizabeth I's adviser and occultist, believed the stone to have magical powers.

The Stone was originally in the middle of Cannon Street and was much larger than it is now. Later the Stone was set into the wall of St Swithin's Church which was on this site before it was bombed during the Second World War (the Stone remarkably left unscathed).

The stone normally sits in a glass case behind an ornate metal grill (mainly overlooked by passers-by) in the front of a sporting goods store opposite Cannon Street Station, on Cannon Street in the City of London. The building containing the store is due to be demolished and planning is currently underway to ensure the stone's survival. The stone has now been taken into the sports store - in the cricket section - to be looked after.

There is also a pub nearby called "The London Stone", which is run by the Eerie Pub Company.

The mysterious "London stone" is going to be rescued from a building due to be demolished. Does it mean that London is going to be saved from an ancient legend?

You couldn't get much less of a romantic setting for an historic monument. It's in a kerbside cage, stuck on the wall of a sports shop in Cannon Street due for demolition.

The only clouds of mystery billowing around it are the car exhaust fumes from the traffic crawling through the City of London.

But this is the neglected setting of the London Stone - an ancient and mysterious object mentioned by Shakespeare, William Blake and Dickens, which has been seen as one of the capital's greatest relics since at least the Middle Ages and probably much earlier.

Now there are plans for the limestone block to be put into the Museum of London for safekeeping, while the building to which it's gloomily attached is pulled down and the site is redeveloped.

Protecting the stone might not be such a bad idea - since there is a legend that, like the ravens at the Tower of London, the fortune of the city is tied to the survival of the stone.

"So long as the stone of Brutus is safe, so long shall London flourish," says the proverb.

This relates to the myth that the stone was part of an altar built by Brutus the Trojan, the legendary founder of London. This might be unlikely, but then again no one really knows its origin. 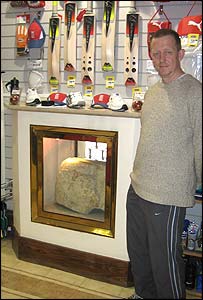 The man who saved London: Chris Cheek protected the stone from builders

Hedley Swain, archaeologist at the Museum of London, says it is clearly an ancient block - but despite the many legends, there is no way of confirming its date or purpose.

A more pressing concern is how to rescue the stone from its current position, in a building that is set to be pulled down.

"The trouble is that at the moment it's not really looked after by anyone," he says. And although there is no fixed timetable, he is expecting the stone to be brought to the Museum of London for display while the new building is constructed.

"People go to look for it, thinking it's going to be a grand object, and then they walk up and down Cannon Street and can't find it."

But he says there is no way of confirming rival theories that it was a Roman distance marker or part of a prehistoric standing stone or any of the many more exotic myths.

The area between Cannon Street and the River Thames was a site of important Roman buildings - and he says that the stone could have been from these buildings.

But it could also have been much older and part of some other pre-Roman edifice.

It's not entirely the case that no one is looking after the stone, because it does have a current custodian: Chris Cheek, the manager of the Sportec sports shop to which the stone is attached. 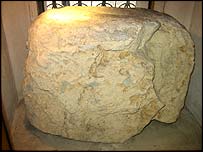 The London stone, as seen from inside the sports shop

And even though he isn't a household name, Londoners might not realise that he has already saved their city from the destruction promised if the stone is lost.

"When we were setting up the shop, there were cowboy builders here, and one of them was just about to take a chisel to the stone. I told him 'Whoah. Stop right there.'"

And Mr Cheek has become attached to this strange situation, where one of the city's most ancient objects is parked in his shop, surrounded by football shirts, cricket bats and trainers.

In fact, while people try to see it from outside, the only decent view of the stone is from the cricket section in his shop.

Does he believe in the legend that London's future well-being depends on this stone?

"Yes. I do really. I'm not into hocus pocus, but there is something about this stone. For some reason it's been kept, there's something special about it."

This could be because of its associations with druids, he suggests, or maybe just the sheer weight of history - from the Roman legionnaires through to the Blitz. 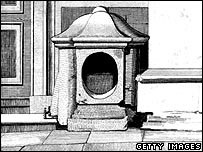 How the London stone was protected in the 18th Century

He also says it reveals something about people's characters.

"There are people who have travelled all the way from Australia to see this stone. And there are other people who are so hectic, so busy with their appointments, that they walk past it every day of week and never even see it."

"And there are people who come in for a pair of socks and then suddenly see it. 'Is that the London stone? I've heard of that'."

Mr Cheek also enjoys the idea that, until it's shifted to a museum, he is the latest in a long line of people to be in charge of something so mysterious and ancient.

The idea of sacred stones is a very ancient tradition - monarchs are still crowned on the Stone of Scone, the so-called "stone of destiny", in Westminster Abbey.

And the London stone has been the source of speculation right through the capital's history.

Queen Elizabeth I's adviser and occultist, John Dee, was obsessed by the stone, believing that it had magic powers. 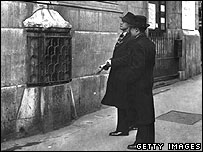 The stone was built into the wall of a church, later destroyed in the Blitz

And Mr Cheek can point out the grooves in the top of the stone, furrowed, he believes, by repeated sword blows.

Christopher Wren saw the foundations of the stone being excavated - and believed it to be part of a bigger Roman structure.

William Blake used the story that the stone had been part of a druid altar - reflecting another belief that it was from a pre-Roman religious stone circle on the site now occupied by St Paul's Cathedral.

The persistent story that the stone was the symbolic centre point from which every distance in Roman Britain was measured was already in circulation in the 16th Century.

But maybe the London stone's most remarkable achievement is to have survived at all - through wars, plagues, fires and even 1960s planning, right in the middle of the financial district of the capital. 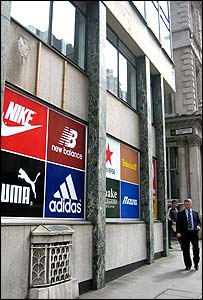 The building housing the London stone is due for redevelopment

It's probably still in a setting not too far from where it stood when the Romans were building London.

In 18th Century prints it was kept in an elegant stone casing - and there are photographs of Victorian police men guarding the stone, when it was set into the wall of a church at waist height.

This church, St Swithin, was damaged during a bombing raid during World War II - and the stone was then attached to a new building on the site.

This current building is set to be pulled down - and the Corporation of London is ensuring that the replacement will be put the chunk of limestone on display in a way that is more prominent.

Archaeologist Hedley Swain says the stone also serves as a reminder that "under the superficial veneer of being a modern business capital, London has so many deep layers of accumulated history".