Quadrillion, quintillion, sextillion - crazy numbers with lots of zeros, that independent Zimbabwean economist John Robertson found himself chewing over with colleagues in the capital Harare this week. 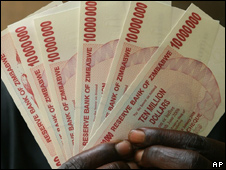 In January, the bank introduced a Z$10m note


The financial throes of the country are now so severe, that some people are seeking a new language to understand it.

On Monday, the Zimbabwe government introduced the 100 billion Zimbabwe dollar note (for the uninitiated, a billion is nine zeros).

The counting of zeros had already become a nightmare for bankers and shoppers before the introduction of the new note - which at the time of writing would buy about two loaves of bread.

So far this year, the country ravaged by hyperinflation has been forced to print 100-million, 250-million and 500-million notes in rapid succession. All of them are now almost worthless.

It has become common now for Zimbabweans to talk of their daily expenses in trillions (one trillion is 12 zeros).

When John Robertson pinned a chart to the wall of office naming numbers up to twice as long, he says he "raised a bit of a laugh" from his colleagues.

But for many officials and accountants, a quadrillion - a million billion - is the number of the day.


Only last week, the Harare Herald advertised the Lotto bonanza prize being offered was 1.2 quadrillion Zimbabwean dollars. At the time, that was equivalent to around 4,000 US dollars.

So how do Zimbabweans deal with such astronomical numbers?

"I actually Googled what comes after trillion about a month ago, and sent that out to all my friends so they'd be prepared," says 28-year-old Esther, a Harare resident who writes a regular diary for the BBC.

Day-to-day transactions for ordinary people have not reached the quadrillion stage, she says, but even trillions present difficulties.

"What is confusing is counting of the figures on your cheques as you try to make sure you are not under or over paying someone, or the struggling to read price tags in shops that have not yet knocked off zeros and so on," she says.

This practice - knocking off zeros - is the most common way of preserving sanity. 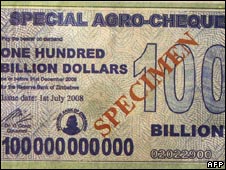 Tills throughout the country have been struggling to cope, as have banking computers, and accounting systems.

As a result, the banks recently agreed to lop six zeros off transactions and documentation.

Economist John Robertson predicts that within a month they will be forced to drop another three.

The other main technique for keeping zeros under control, is to think in terms of a hard currency - in this case, US dollars.

It would be against the law to advertise your house in US dollars, Mr Robertson says, but in practice this is the currency used for big purchases.

"Nothing would be written down and on the day of exchange, that figure would either be paid in US dollars, or converted into Zimbabwe dollars. Then you would be talking big numbers - which will take a bit of getting used to."

While Zimbabwe is the only country currently suffering from hyperinflation its economic woes are not unprecedented.

History has shown that in countries experiencing hyperinflation - characterised by a monthly inflation of more than 50% - the central bank often prints money in larger and larger denominations as the smaller denomination notes become worthless.

In Yugoslavia, for example, the rate of inflation was five quadrillion per cent between October 1993 and January 1994. The government was forced to issue a 500 billion dinar note in 1993.

In Germany after World War I, prices were doubling about every two days and workers were paid daily or more often with bundles of cash. The highest value banknote issued by the Reichsbank had a face value of 100 trillion marks.

Marcus du Sautoy, professor of mathematics at the University of Oxford, says in general people are very bad at assessing numbers of this size.
"Beyond a million it all becomes a blur," he says.

"People are really looking for the ratio of one product to another, and then it's irrelevant how many zeros there are at the end of the number," he says. If shops and banks don't drop the zeros, it's done instead by the human brain.