Saskatchewan man faces charges under National Parks Wildlife regulations, fines of up to $125,000 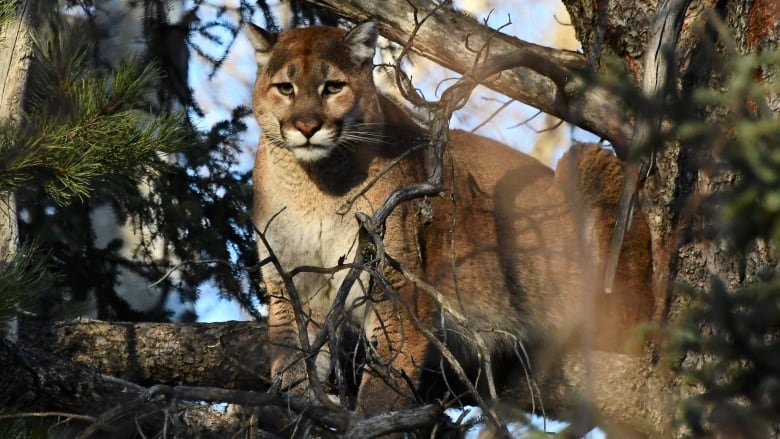 This cougar, nicknamed 'JaxonStorm', was captured and collared with a GPS tag in Alberta in 2018 as part of a research project to track wildlife in the province
A Saskatchewan man faces rare charges under National Parks Wildlife regulations and potential fines of up to $125,000 after allegedly using a slingshot to hurl projectiles at a cougar in Banff National Park.
According to Parks Canada, an eyewitness provided key evidence  a number of photos that wardens used to build the case.
"Using a vehicle description and photos provided by the public, park wardens located the vehicle and arrested the individuals within," said Parks Canada in a statement to CBC News.
A 40-year-old man from Prince Albert, Sask., has been charged with two offences under National Parks Wildlife Regulations  disturbing an animal in a national park and possession of a loaded firearm outside of a vehicle in a national park, charges that are rarely laid.
Parks Canada said that, under the regulations, a slingshot is considered a firearm.
The charges carry maximum penalties of $25,000 and $100,000.
The arrest happened approximately 25 kilometres east of where the slingshot incident was reported on May 31.
Parks Canada said the cougar was on the wrong side, or the highway side, of a wildlife fence that runs along the Trans-Canada highway near Lake Louise, Alta., when a man used a slingshot and an unknown projectile to "harass" the animal.
It's unclear how long the incident lasted. Parks Canada said wardens were on scene within 10 minutes of receiving the call.
The Public Prosecution Service of Canada (PPSC) said it believes it has strong evidence against the accused.
"Our position is that the evidence exists to establish those things [the offences] beyond a reasonable doubt," said Tyler Lord, Crown counsel for the PPSC.
Charges in the public interest
Weighing the evidence is key in assessing whether a prosecution will commence, Lord said, but it's not the only consideration.
"The other aspect is public interest," he said.
"When it comes to files coming from the national park, there's very high public interest in things which might seem to be relatively minor, we take a great deal of interest in because Banff National Park is obviously very well visited, it's known internationally. And, so this kind of allegation is something that I think the public would take very seriously."
It's unclear whether the animal was hit or suffered any injuries. Wardens were able to coax it back into the fenced area.
Parks Canada said the animal was not trapped or cornered during the incident, but it was "contained" by the wildlife fence along the highway corridor.
Lord was asked whether the decision to pursue charges is meant to send a message to people who might consider this type of behaviour in a national park.
"If there was a conviction and sentence in this case, that's when a message would be sent."
The accused is scheduled to appear in provincial court in Canmore, Alta., in November.

Re: Idiot Busted in Banff-Cougar harassed with slingshot

3 weeks ago
Outstanding. I'd say "throw the book at him," but better to hang on to the book and beat him with it.

Re: Idiot Busted in Banff-Cougar harassed with slingshot

3 weeks ago
Too bad the cougar didn't fight back.