AFTER six months slaving away on a follow-up to their record-breaking debut album, ARCTIC MONKEYS have revealed details of their new long-player, Favourite Worst Nightmare.

And unlike the tracks on Whatever People Say I Am, That’s What I’m Not, this time ALEX TURNER, NICK O’MALLEY, MATT HELDERS and JAMIE COOK have resisted using the entire dictionary in every song.

As always there’s a story behind each track and the first single to be released — Brianstorm (not a typo) on April 16 — is about a strange character the lads met on tour in Japan.

The group have been so worried about details of the album getting out before its April 23 release that they leaked false names to throw people off the scent. A source said: “The pressure is on to make this album as successful as the last and they are trying to keep everything under wraps.”

Here, I can reveal the full line-up:

Also, the Arctic Monkeys are to play at this year's Glastonbury Festival for the first time -


The Arctic Monkeys and Bjork are the first major acts to be confirmed for this year's Glastonbury music festival.

The Glastonbury Festival is the world's biggest greenfield music festival and is held nearly every year on a farm six miles east of the town of Glastonbury , overlooked by the Glastonbury Tor in the mystical "Vale of Avalon " (associated with King Arthur and Merlin the Magician). There was no Glastonbury last year in order to allow the land to recover and to give the organisers a break.

The Arctic Monkeys will headline the main Pyramid Stage during the event on Michael Eavis' Somerset farm in June.

"Most of the line-up's done now," Mr Eavis told BBC 6Music, adding that the "biggest band in the world" had also contacted him about performing.

But he denied it was U2 or Coldplay. "You won't know until after 1 April", when tickets go on sale, he said.

Fans will be able to pre-register for tickets during February by filling in a form online or from camping shop Millets. 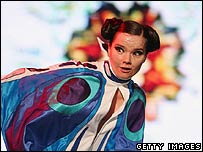 Bjork is currently working on a new album


They will also have to submit a photograph, which will be printed on their tickets in an attempt to beat touts.

"The first 150,000 people that come through that will be booked in. We'll already have the information on those people, their pre-registration forms and photos, so they can't sell those tickets on."

Co-organiser Emily Eavis told the BBC News website: "We're absolutely thrilled to be able to put Bjork and the Arctic Monkeys on because both are firm favourites in our household.

"The Arctic Monkeys have never done it so this will be their first year and Bjork has done the festival a few times now and is absolutely fantastic." No date had been set to reveal the full line-up, but it would be "in the coming months", she added. But she refused to say which nights the Arctic Monkeys and Bjork will play.