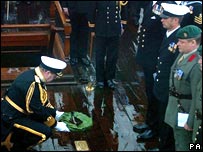 A ceremony has been held in Portsmouth to mark the 201st anniversary of Lord Nelson's victory at Trafalgar.


A wreath was laid at Portsmouth Naval Base on the spot where Nelson was fatally wounded onboard HMS Victory.

The low-key event follows last year's Trafalgar 200 celebrations which included a fleet review by the Queen and a spectacular fireworks display.

The defeat of the French and Spanish navies at Trafalgar in 1805 is regarded as a turning point in European history.

The hoisting of the Colours (union jack and ensign) and Nelson's signal, "England Expects That Every Man Will Do His Duty", on the Victory marked the start of the commemoration.

Nelson's actual ship is used as a tourist attraction and is based next to Portsmouth's naval base. She was launched in 1765.


A team of 32 ratings and cadets from HMS Victory, HMS Collingwood and Training Ship (TS) Victory hoisted the 33 flags in sequence on Victory's three masts.

After the ceremony he said: "We had a minute's silence on board.

We cast a thought for Nelson and all those who fell with him 201 years ago but our thoughts were also with those who die today.

"This week we have a marine very tragically killed, Gary Wright, of 45 Commando Royal Marines, and it's right that we remember him in our thoughts and prayers. "I think heritage is so important. It's not just looking back at dusty history, it's looking back and understanding the responsibility we have today. We need to pass it on to our successors for the future."

England expects that every man will do his duty" was a signal sent by Admiral Horatio Nelson, 1st Viscount Nelson from his flagship HMS Victory as the Battle of Trafalgar was about to commence on October 21 , 1805 . Trafalgar was the decisive naval engagement of the Napoleonic Wars . It gave the United Kingdom of Great Britain and Ireland control of the seas, removing all possibility of a French invasion and conquest of Britain. Although there was much confusion surrounding the wording of the signal in the aftermath of the battle, the significance of the victory and Nelson's death during the battle led to the phrase becoming embedded in the English psyche, and it has been regularly quoted, paraphrased and referenced up to the modern day. [1]

As the British fleet closed with the opposing combined fleets of France and Spain , Lord Nelson signalled all the necessary battle instructions to his ships. However, aware of the momentousness of events to come, Lord Nelson felt that something extra was required. He instructed his signal officer, Lieutenant John Pasco , to signal to the fleet, as quickly as possible, the message "England confides [i.e. is confident] that every man will do his duty." Pasco suggested to Nelson that expects be substituted for confides, since the former word was in the signal book, whereas confides would have to be spelt out letter-by-letter. Nelson agreed to the change (even though 'expects' gave a less trusting impression than 'confides'): [2]

"His Lordship came to me on the poop, and after ordering certain signals to be made, about a quarter to noon, he said, 'Mr. Pasco, I wish to say to the fleet, ENGLAND CONFIDES THAT EVERY MAN WILL DO HIS DUTY' and he added 'You must be quick, for I have one more to make which is for close action.' I replied, 'If your Lordship will permit me to substitute the confides for expects the signal will soon be completed, because the word expects is in the vocabulary, and confides must be spelt,' His Lordship replied, in haste, and with seeming satisfaction, 'That will do, Pasco, make it directly.' "


At the time, England was widely used as another word for Great Britain, which in those days consisted of England, Wales, Scotland and the whole of the island of Ireland. Nowadays, using the word England to refer to the whole of Great Britain does not make you very popular with the Welsh, Scots and Northern Irish.