The Domesday Book is going online. 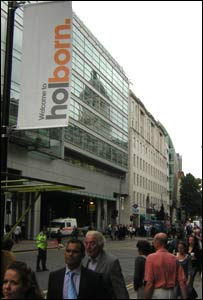 Holborn, London was the site of a vineyard in 11th Century England

The Domesday Book has embarked on many varied journeys in its 920-year lifetime. Its latest stop is now the web.

The iconic 11th Century document, which has been rebound, copied, facsimiled and even hidden in prisons, has been made available online.

This latest chapter in the history of the survey of England, carried out for William the Conqueror, has been organised by the National Archives in Kew, West London, where the book has its home.

It is the oldest public record at the archives and was voted the nation's finest treasure in 2005. All of its pages are now available to be viewed, along with a translation from the original Latin, to anyone with an internet connection.

Domesday specialist Adrian Ailes, based at the National Archives, said: "It's an historic day for the Domesday Book because it's the first time it's gone on the world wide web.

"It's also historic for the country, because now people can go on the web and discover a snapshot of 11th Century England.

"There was nothing like this done in the country until the 19th Century census." 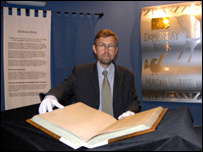 Adrian Ailes is an expert on the Domesday Book

According to the Holborn Partnership, the types of business currently to be found in Holborn's Business Improvement District include 23 banking and finance organisations, 19 legal professions and 32 property companies. The area is also a centre of the UK jewellery trade.

Back in the 11th Century, however, Holborn was known for having one of the 45 vineyards recorded within the Domesday book.

The entry states that "At Holborn the king has 2 cottars (peasants) who pay 20d (20 old pence) a year to the king's sheriff".

It adds: "William the chamberlain pays 6s (6 shillings) a year to the king's sheriff for the land on which his vineyard is situated."

Standing on Holborn's bustling Kingsway was Yassin Ali, aged 24, an IT support worker who visits the area every other week "to go to the pub with my friend".

"I'm surprised to hear that they used to grow grapes in Holborn," she said.

"It's a cool place, you've got Covent Garden and Shaftesbury Avenue nearby so it's a good location to get to places around the West End."

Kevin Kozlyk, 45, who is visiting the UK from Canada, was walking through Holborn for the very first time.

"It doesn't surprise me that vineyards were once here because 900 years ago this would have been outside the city, and not well developed from a civic perspective," he said.

Chock full of facts and figures, the Domesday Book was regarded as a vastly comprehensive valuation of the kingdom when it was put together following its commission in 1085.

One commentator said that "not one ox, or cow, nor one pig was left out".

There are actually two books: the Great Domesday and Little Domesday, compiled between January 1086 and September 1087.

Little Domesday (which is actually the larger of the two) records information covering Essex, Norfolk and Suffolk.

Work stopped on the entire project following William's death, but there were still a few additional entries squeezed in afterwards.

It contains such nuggets as the explanation of how if you killed a man in Chester on a Sunday and Holy days, you would be fined £4 but only 40 shillings (£2) on all other days.

The task of getting it onto the internet was a vast job, the roots of which began some 20 years ago.

Emma Allen, documents online manager for the National Archive, explained how the original images of the pages now available online were first taken in 1985.

"These high-quality facsimile photographs are what we used for the internet site," she said.

"The Latin translation was done by other experts, so our job was to bring both these elements together to place it on the internet."

Searching the site for a place-name is free, but to download the information costs £3.50.

And although it took a small army of historians, IT engineers and experts to get the Domesday Book online, the original document was almost totally written by just one anonymous scribe - in little over a year.

Books compiled between January 1086 and September 1087

Average of 44 lines of writing per page

Is a part of Britain's "unwritten" Constitution

Whole value of places surveyed (nearly the whole of England) was £78,000 - value today is £3 trillion

Book can still be used today in court for property disputes

Domesday Book (also known as Domesday, or Book of Winchester), was the record of the great survey of England completed in 1086, executed for William the Conqueror. The survey was similar to a census by a government of today. William needed information about the country he had just conquered so he could administer it. Whilst spending the Christmas of 1085 in Gloucester, William "had deep speech with his counsellors and sent men all over England to each shire ... to find out ... what or how much each landholder had in land and livestock, and what it was worth." One of the main purposes of the survey was to find out who owned what so they could be taxed on it, and the judgment of the assessors was final -- whatever the book said about who owned the property, or what it was worth, was the law, and there was no appeal. It was written in Latin, although there were some vernacular words inserted for native terms with no previous Latin equivalent and the text was highly abbreviated. When the book took the name "Domesday" (Middle English spelling of Doomsday) in the 12th century, it was to emphasize its definitiveness and authority (the analogy refers to the Christian notion of a Last Judgment).

Domesday Book is really two independent works. One, known as Little Domesday covers Norfolk, Suffolk and Essex. The other, Great Domesday covers the rest of England, except for lands in the north that would later become Westmorland, Cumberland, Northumberland and County Durham (partly because some of these lands were under Scottish control at the time). There are also no surveys of London, Winchester and some other towns. The omission of these two major cities is probably due to their size and complexity, Cumberland is missing because it was not conquered until some time after the survey and the Prince-Bishop William of St. Carilef had the exclusive right to tax Durham; the omission of the other counties has not been fully explained.

Despite its name, Little Domesday is actually larger - as it is far more detailed, down to numbers of livestock. It has been suggested that Little Domesday represents a first attempt, and that it was found impossible, or at least inconvenient, to complete the work on the same scale for Great Domesday.

For both volumes, the contents of the returns were entirely rearranged and classified according to fiefs, rather than geographically. Instead of appearing under the Hundreds and townships, holdings appear under the names of the local barons, i.e. those who held the lands directly of the crown in fee.

In each county, the list opened with the holding of the king himself (which had possibly formed the subject of separate inquiry); then came those of the churchmen and religious houses; next were entered those of the lay tenants-in-chief (barons); and last of all those of women, of the king's serjeants (servientes), of the few English thegns who retained land, and so forth.