Data from satellite sensors show that during the Northern Hemisphere's growing season, the Midwest region of the United States boasts more photosynthetic activity than any other spot on Earth, according to NASA and university scientists.
Healthy plants convert light to energy via photosynthesis, but chlorophyll also emits a fraction of absorbed light as fluorescent glow that is invisible to the naked eye. The magnitude of the glow is an excellent indicator of the amount of photosynthesis, or gross productivity, of plants in a given region.

Research in 2013 led by Joanna Joiner, of NASA's Goddard Space Flight Center in Greenbelt, Md., demonstrated that fluorescence from plants could be teased out of data from existing satellites, which were designed and built for other purposes. The new research led by Luis Guanter of the Freie Universität Berlin, used the data for the first time to estimate photosynthesis from agriculture. Results were published March 25 in Proceedings of the National Academy of Sciences.

According to co-author Christian Frankenberg of NASA's Jet Propulsion Laboratory in Pasadena, Calif., "The paper shows that fluorescence is a much better proxy for agricultural productivity than anything we've had before. This can go a long way regarding monitoring  and maybe even predicting  regional crop yields." 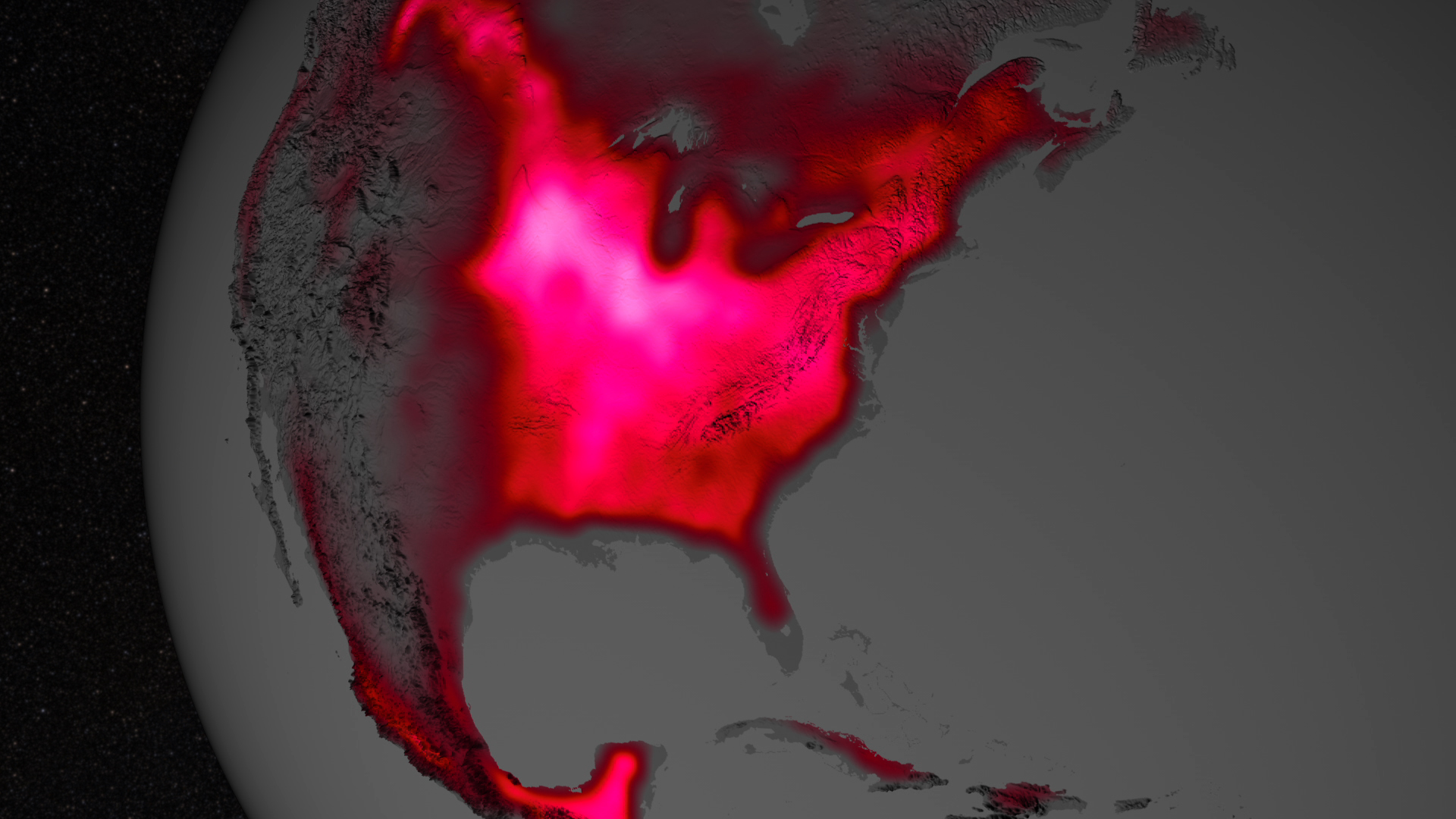 , Joiner and Frankenberg launched their collaboration at a 2012 workshop, hosted by the Keck Institute for Space Studies at the California Institute of Technology in Pasadena, to explore measurements of photosynthesis from space. The team noticed that on an annual basis, the tropics are the most productive. But during the Northern Hemisphere's growing season, the U.S. Corn Belt "really stands out," Frankenberg said. "Areas all over the world are not as productive as this area."
The researchers set out to describe the phenomenon observed by carefully interpreting the data from the Global Ozone Monitoring Experiment 2 (GOME-2) on Metop-A, a European meteorological satellite. Data showed that fluorescence from the Corn Belt, which extends from Ohio to Nebraska and Kansas, peaks in July at levels 40 percent greater than those observed in the Amazon.

Unlike most vegetation, crops are made to perform. Frequent access to nutrients and irrigation results in healthy, productive plants  the glow of which can be detected by satellites.
Image Credit: Wikimedia commons/Illustratedjc
Challenges remain in estimating the productivity of fragmented agricultural areas, not properly sampled by current space-borne instruments. That's where missions with better resolution could help, such as NASA's Orbiting Carbon Observatory-2  a mission planned for launch in July 2014 that will also measure solar-induced fluorescence.
The research could also help scientists improve the computer models that simulate Earth's carbon cycle, as Guanter found a strong underestimation of crop photosynthesis in models. The analysis revealed that carbon cycle models  which scientists use to understand how carbon cycles through the ocean, land and atmosphere over time  underestimate the productivity of the Corn Belt by 40 to 60 percent.

Unlike most vegetation, food crops are managed to maximize productivity. They usually have access to abundant nutrients and are irrigated. The Corn Belt, for example, receives water from the Mississippi River. Accounting for irrigation is currently a challenge for models, which is one reason why they underestimate agricultural productivity.

"If we don't take into account irrigation and other human influences in the agricultural areas, we're not going to correctly estimate the amount of carbon taken up by vegetation, particularly corn," Joiner said. "Corn plants are very productive in terms of assimilating carbon dioxide from the atmosphere. This needs to be accounted for going forward in trying to predict how much of the atmospheric carbon dioxide will be taken up by crops in a changing climate."

According to Frankenberg, the remote sensing-based techniques now available could be a powerful monitoring tool for food security, especially data from OCO-2 and in combination with data from other upcoming satellites, such as NASA's Soil Moisture Active Passive, scheduled for launch later this year.

NASA monitors Earth's vital signs from land, air and space with a fleet of satellites and ambitious airborne and ground-based observation campaigns. NASA develops new ways to observe and study Earth's interconnected natural systems with long-term data records and computer analysis tools to better see how our planet is changing. The agency shares this unique knowledge with the global community and works with institutions in the United States and around the world that contribute to understanding and protecting our home planet.

May 15th, 2018
NASA! That's the same fake news source that created the climate change hoax! The agriculture thing must be all wrong, too. Maybe, agriculture is a LIE-BERAL plot started by Hillary.

NASA! That's the same fake news source that created the climate change hoax! The agriculture thing must be all wrong, too. Maybe, agriculture is a LIE-BERAL plot started by Hillary.

There's a whole bunch of stupid in this post.

There's a whole bunch of stupid in this post.

There's whole bunch of stupid in your country.

You do know that Il Duce defunded NASA's climate research?

What is it before it gets converted? Cream cheese?

May 15th, 2018
Good question. Maybe it explains why funding was cut according to Kitty?

What is it before it gets converted? Cream cheese?

Nope, a manifestation of the Electric Universe (note caps).

Colonel Corn of the Moonbat Brigade is fighting climate terrists.

Kernels of corn are batteries.

Colonel Corn of the Moonbat Brigade is fighting climate terrists.

Well, given his Ph.D. in Sillytwattery as well as his extensive military (video gaming) experience, he's uniquely well placed to do so!