Blackleaf
#1 Sep 12th, 2010
The Scottish Football Association has made an apology to Liechtenstein after Scotland fans booed the nation's national anthem before a Euro 2012 qualifier - because it has the same tune as God Save the Queen. God Save the Queen is the anthem used by Scotland's arch rivals England.

George Peat, the Scottish FA's acting chief executive, said: "I was embarrassed and extremely disappointed by the disgraceful behaviour of some of our supporters during the Liechtenstein national anthem at Hampden Park last night."

The booing seemed to spur minnows Liechtenstein on, and they took a shock 1-0 lead. Scotland only saved themselves from a very humiliating defeat (and that's saying something) thanks to a winner SEVEN minutes into injury at the end of a match against a team ranked just 141st in the world.

Liechtenstein is a tiny German-speaking constitutional monarchy just 62 square miles in size sandwiched between Switzerland and Austria reigned over by Hans-Adam II. Its population is just 36,000.

God Save the Queen is sung by the England and Northern Ireland teams. It was also sung by the Scotland and Wales teams until they dropped it for their own anthems around 20 years ago.

This booing episode wasn't a good advert for Scotland's fans, who like to boast they are the best in the world and are quick to criticise any perceived wrongdoing by England fans, who are amongst the best behaved in the world.

But, yet again, Scotland fans - the so-called Tartan Army - embarrass themselves at every game by turning up at the stadium wearing kilts, Tam O'Shanters covered in badges or ginger-haired wigs and have a tendency to have their photos taken whilst baring their bare backsides.

By Telegraph staff
08 Sep 2010
The Telegraph 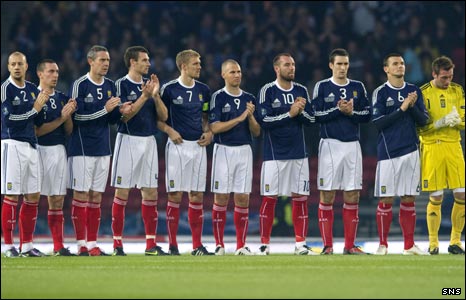 Scotland's players before their Euro 2012 qualifier against tiny Liechtenstein. The booing seemed to spur Liechtenstein on. Scotland were lucky to beat the minnows, ranked 141st in the world, thanks to a winning goal 7 minutes into stoppage time.

The Liechtenstein anthem, which has the same tune as God Save The Queen, the anthem which is used by the England team, was met with audible derision by some members of the Scotland support ahead of last night's match at Hampden Park, which Craig Levein's men won 2-1 courtesy of Stephen McManus' 97th-minute header.

Peat said: "I was embarrassed and extremely disappointed by the disgraceful behaviour of some of our supporters during the Liechtenstein national anthem at Hampden Park last night.

"The Scotland fans have worked hard to earn their reputation throughout the world as fun-loving and respectful followers of football.

"Last night, those who chose to boo our opponents' anthem only served to tarnish that reputation.

"I apologise unreservedly to our visitors for the crass reaction to their anthem, just as I did in private last night to the Liechtenstein delegation.

The national anthem of Liechtenstein, a tiny constitutional monarchy sandwiched between Switzerland and Austria, has the same tune as God Save the Queen

"It must not be forgotten that all nations must abide by FIFA's Fair Play policy and last night's behaviour does nothing to help Scotland's image."