Chongqing, China - Jianguo was exhausted when he returned home after a long day's work at Wuhan's Pulmonary Hospital, one of the medical facilities designated to treat those infected with a new type of coronavirus in the central Chinese city.

The 52-year-old cleaner said his hospital was overwhelmed by the sheer number of people seeking medical care, with doctors and nurses overworked and supplies running low.

Since the new virus was first detected in Wuhan in late December, nearly 400 people have died and more than 17,000 others infected - the vast majority of deaths and infections have occurred in Hubei province, of which Wuhan is the capital. The rapidly spreading virus has stretched the healthcare systems in Hubei, with some medical personnel saying China's government was completely unprepared for the outbreak and describing its response as chaotic.

But when Jianguo turned on his television on January 28, he was greeted by television anchors hailing the government's "transparent and swift" response and videos of Wuhan residents joyfully expressing faith in the Chinese Communist Party to contain the virus.

Speaking to Al Jazeera on the telephone, Jianguo, who preferred to give one name, said he immediately contacted his son, an avid user of the Chinese micro-blogging site, Weibo.

"Are you seeing the news? Are they serious?" he recalled telling his son. "Doctors and nurses at my hospital are so exhausted that they are on the edge of breaking down. And those people who look so happy on camera - are they living in a different universe?"

Jianguo's son immediately posted a message on his Weibo account, along with a picture from the hospital of doctors and nurses sleeping on chairs in apparent exhaustion. "I don't care what CCTV is saying," he wrote, referring to Chinese state television. "But the situation in Wuhan is still dire."

The picture, which was quickly shared and liked by thousands of Weibo users, is just one among many posted on Chinese social media in recent days, challenging the official narrative offered by the heavily-censored state-media

China has tightly controlled the coverage of the outbreak, according to Human Rights Watch, which on January 30 accused Chinese authorities of withholding information from the public, under-reporting cases of infection and downplaying the severity of the infection. The New York-based rights group said Chinese police have harassed people on allegations of "spreading rumours" about the outbreak, including the detention of a doctor who had warned colleagues that the new virus was similar to Severe Acute Respiratory Syndrome (SARS), which had killed 349 people and infected 5,300 others in mainland China in 2003.

Indeed, it was only after January 20, when President Xi Jinping issued a statement saying he would curb the spread of the outbreak and called for the release of information in a "timely manner", that state media started to report on the extent of the crisis. Days later, Wuhan, a city of 11 million, was placed under quarantine and the lockdown was extended to an area of more than 50 million people - measures the World Health Organization (WHO) has praised Chinese authorities for.

But in the days that followed, many Wuhan residents took to social media to criticise the government's handling of the crisis, with users complaining about what they said was a lack of adequate care at hospitals as well as what they called a delay in informing citizens of the outbreak.

On Wednesday, another Weibo user posted a picture of her grandfather lying in the hallway of a hospital and wrote: "My grandfather has been having a fever for three days now, and no hospital is admitting him! Is the government going to let all of us die like this?!"

On January 22, one user posted an article asking the question: "Why did it take the outbreak so long to attract public attention?". In response to the article, another user alleged: "The government already knew the existence of human-to-human transmission in early January, but still, news kept telling us there was no such possibility. They also arrested eight people who shared the information initially for spreading rumours. Not until there were over confirmed cases did the government start to respond. Shouldn't the government be responsible?"

Another young man from the neighbouring city of Huanggang said in a video posted online on January 30: "I might be arrested after posting this video. But I still want all of you to know how dire the situation is in Huanggang, and we are in desperate need of help - the government doesn't care about us any more!"

That video has since been taken down.

The Chinese authorities closely monitor all information shared on Weibo and other platforms, deleting posts that counter the government narrative and banning users that do so. And so in this context, some observers say the current anger and frustration on Weibo is extraordinary.

China's more tech-savvy citizens are also turning to platforms blocked in the country, such as Twitter and YouTube, using virtual private network services to get the message out.

"I am not even afraid of death; do you think I'll be afraid of you - Communist Party?" Qiushi Chen, a well-known lawyer who travelled to Wuhan to report on the outbreak said in a Twitter video that also complained about the lack of medical supplies at hospitals.

Another Wuhan resident, in a video posted on YouTube, described life under lockdown. "It's like living in hell, waiting for death," he said.

This and other social media posts not only offer a closer look at what is happening on the ground in Wuhan but also give a human face to the suffering in the city.

For instance, in one article posted on WeChat, one woman described her mother's death in detail.

"The car that picked up my mother's corpse drove away, and I was running after it, crying like I never did before," she wrote. "It was a cold day - I felt despair and hopelessness."

Amid the apparent frustration in Wuhan, some of China's privately-owned media have also begun to question the official narrative, publishing stories on the lack of medical supplies and questioning the conduct of the local Red Cross, which has been accused of failing to disburse donations.

Caixin, a widely read news website, even published an interview with the doctor who was questioned for speaking out on the spread of the new virus and another article suggesting the lack of freedom of speech in China had affected the effort to contain the outbreak.

Yet, state-media coverage of the coronavirus remains overwhelmingly positive - there is little mention of the apparent anger in Wuhan and news anchors on state television repeat on an almost hourly basis the message that the "international society has been highly impressed by Chinese government's fast response and the unprecedented measures to contain the outbreak".

The state-owned English language Global Times, meanwhile, has focused on measures taken by the Chinese government in addressing the crisis, including the wide-ranging lockdown and the construction of a new hospital in Wuhan within 10 days.

"Some measures which are unbelievable at ordinary times have been quickly implemented and the entire society has been cooperating. A large but orderly situation against the epidemic has been formed," it said in an article that also slammed the United States's recent decision to bar travellers from China in a bid to limit the spread of the new virus.

"The pandemic will finally pass. Many people bad-mouthed China during SARS 17 years ago, but what happened after? Nobody should underestimate China's ability to fight a public health crisis. Since we can take measures that many countries cannot take, we can also quickly recover vitality after the crisis," the article said.

So the Chinese are lying about the Coronavirus outbreak, and it is much more severe outbreak than they are letting on. What a surprise.

In that case lets send trudOWE and his trust fund cronies over there to help out.

Feb 4th, 2020
Wuhan coronavirus: Confirmed cases top 20,000 as China marks deadliest day
WUHAN, CHINA - JANUARY 30: (CHINA - OUT) Work continues on Wuhan Huoshenshan hospital on January 30, 2020 in Wuhan, China. The 1000-bed hospital is scheduled to open on February 5. The number of cases of a deadly new coronavirus rose to over 7000 in mainland China Thursday as the country continued to lock down the city of Wuhan in an effort to contain the spread of the pneumonia-like disease which medicals experts have confirmed can be passed from human to human.

In an unprecedented move, Chinese authorities put travel restrictions on the city which is the epicenter of the virus and neighboring municipalities affecting tens of millions of people. The number of those who have died from the virus in China climbed to over 170 on Thursday, mostly in Hubei province, and cases have been reported in other countries including the United States, Canada, Australia, Japan, South Korea, and France. The World Health Organization has warned all governments to be on alert, and its emergency committee is to meet later on Thursday to decide whether to declare a global health emergency.

Feb 4th, 2020
Notice, no one is talking about the unrest in Hong Kong the last couple of weeks.

Feb 13th, 2020
Well the Coronavirus is spreading like wildfire. Soon all of China will have it.

Well the Coronavirus is spreading like wildfire. Soon all of China will have it.

Thank You GOD.. now send some Chinese to Iran. 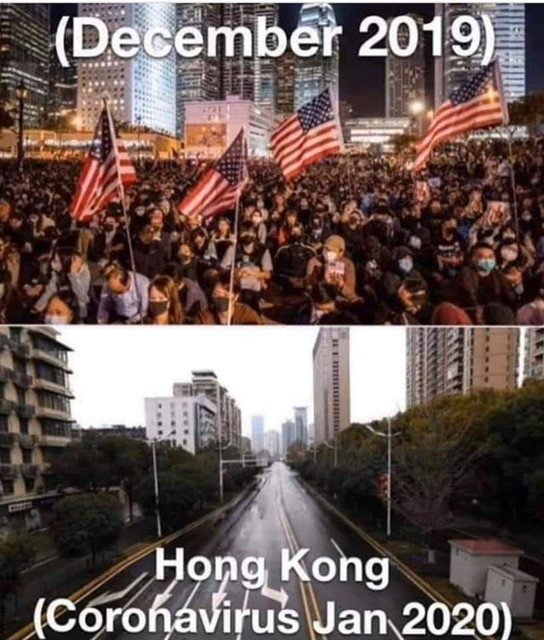 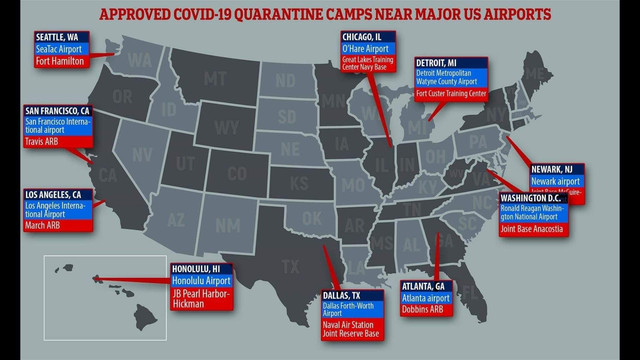 Well the Coronavirus is spreading like wildfire. Soon all of China will have it.

What unrest, view photo above